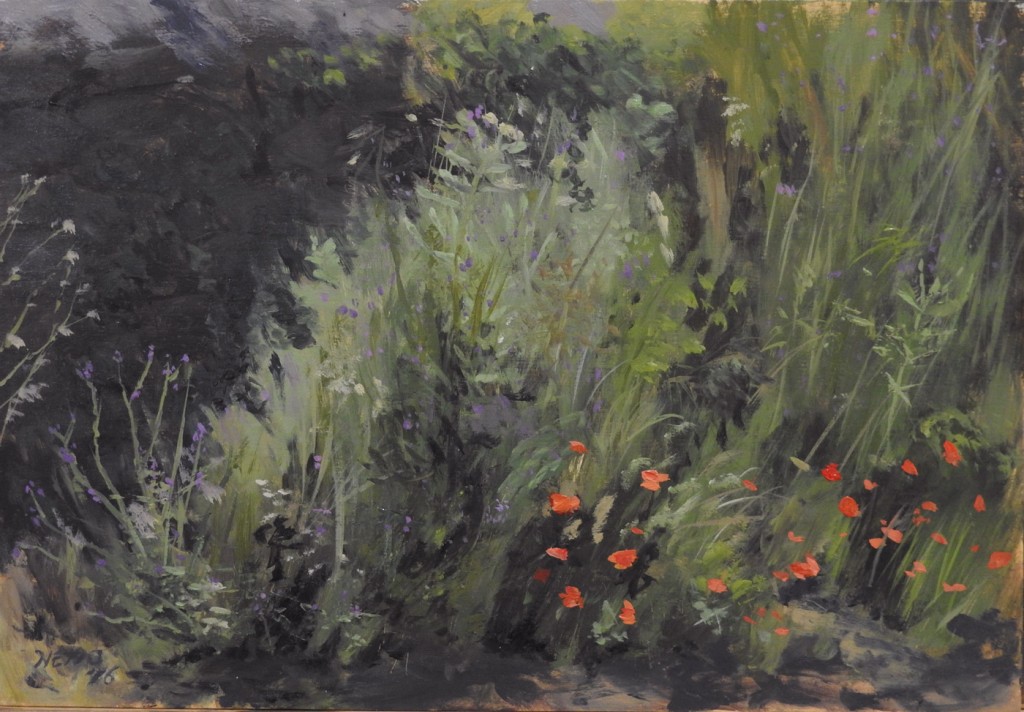 I‘ve finally brave and took my oils outdoors for the first time. To entry the Weeds Painting Challenge at Gurney Journey, I wanted to try oils in plein air, instead of sticking to watercolors or gouache as I did in the past. I love painting in oils, so it was a great chance to see if doing actual direct painting is any different from using photos.

Really funny, even if I my neck got sunburnt on the left side (the downsides of standing 4 hours and a half under the sicilian sun.
Oils on wooden panel, about a4 size. Titanium white, cad yellow light, yellow ochre, burnt sienna, pyrrole red, permanent rose, ultramarine.
See my post on the Facebook Event page for the fukk work in progress 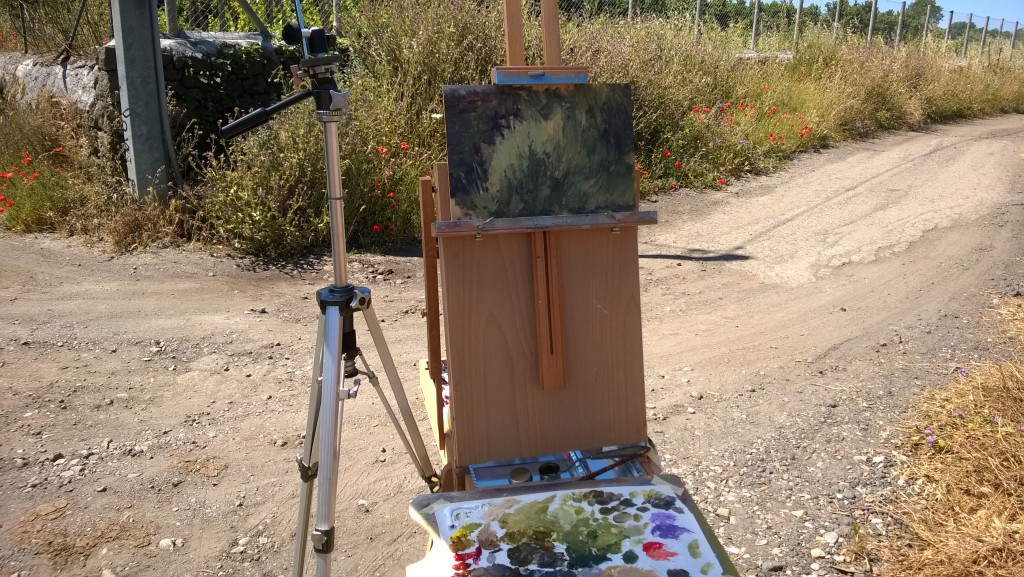 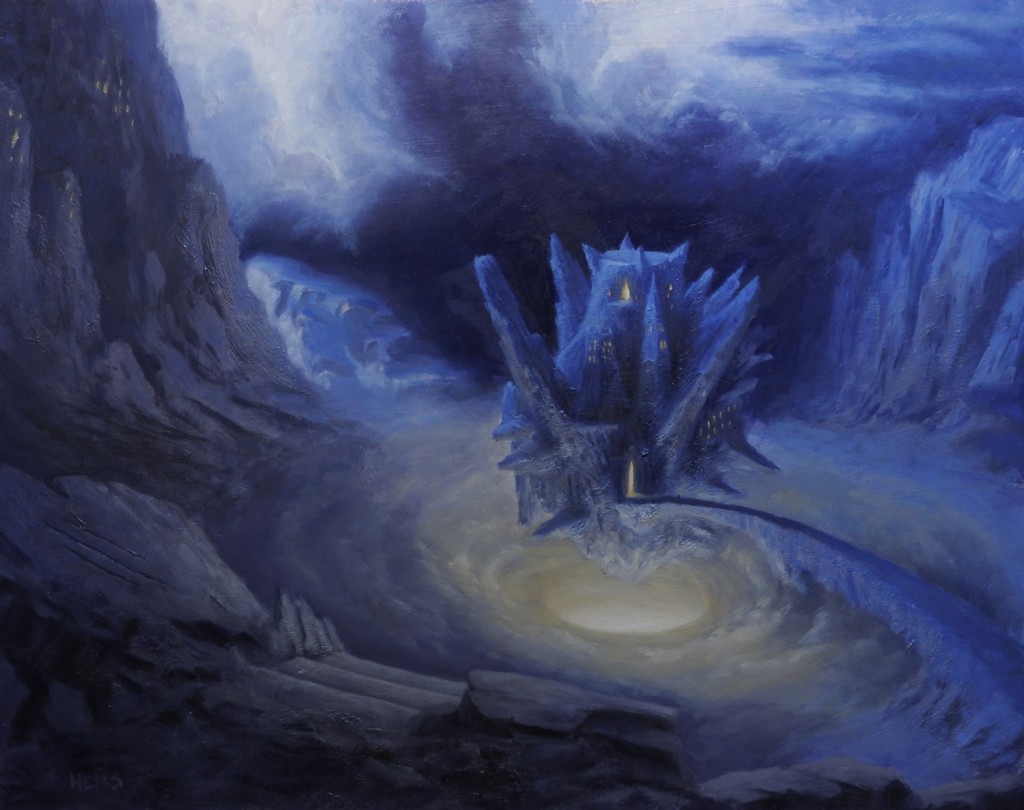 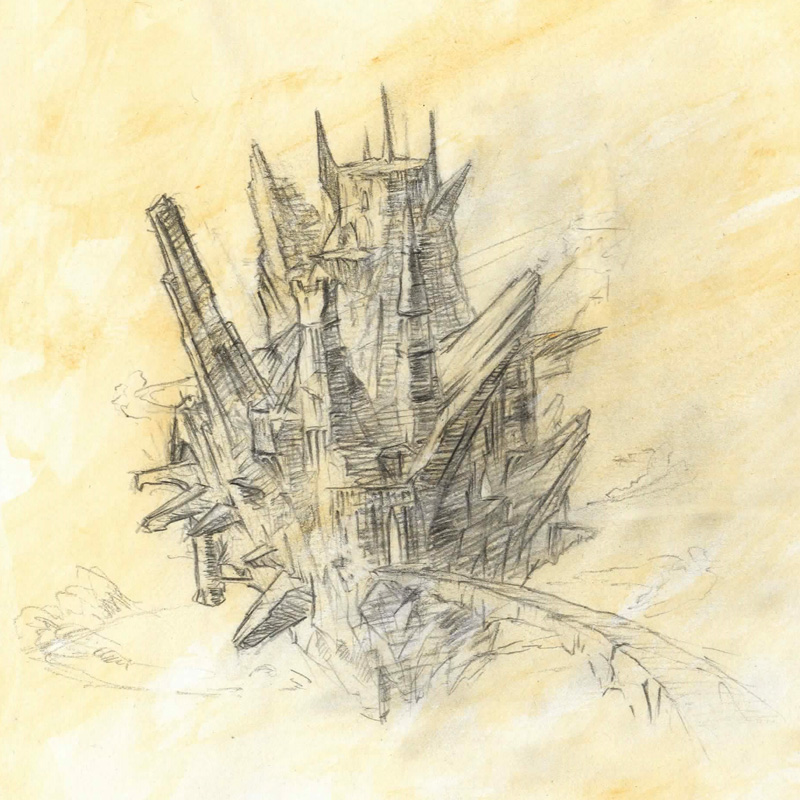 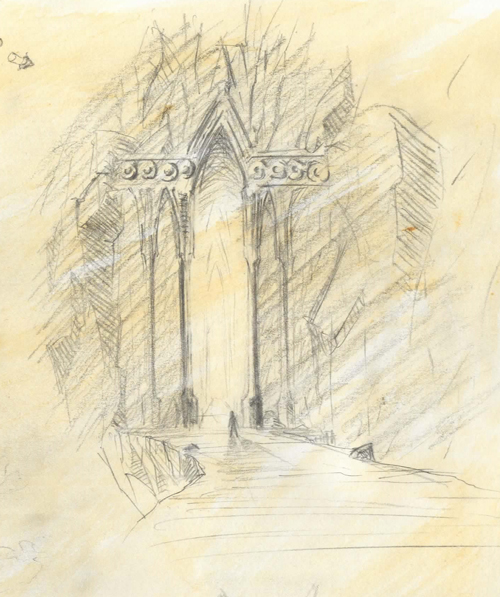 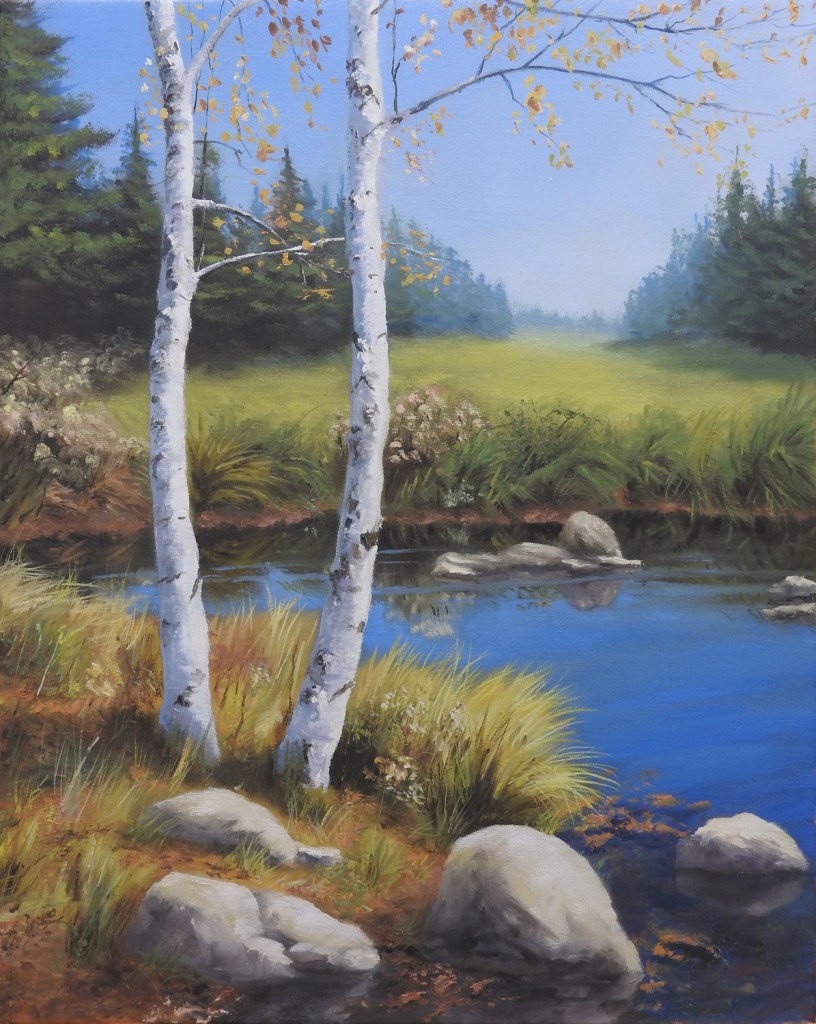 I’ve been working on this painting for the past couple of weeks. I chose a bigger size (at last), 16 by 20 inches, to give me enough room for details.

As reference, I used the following photo: 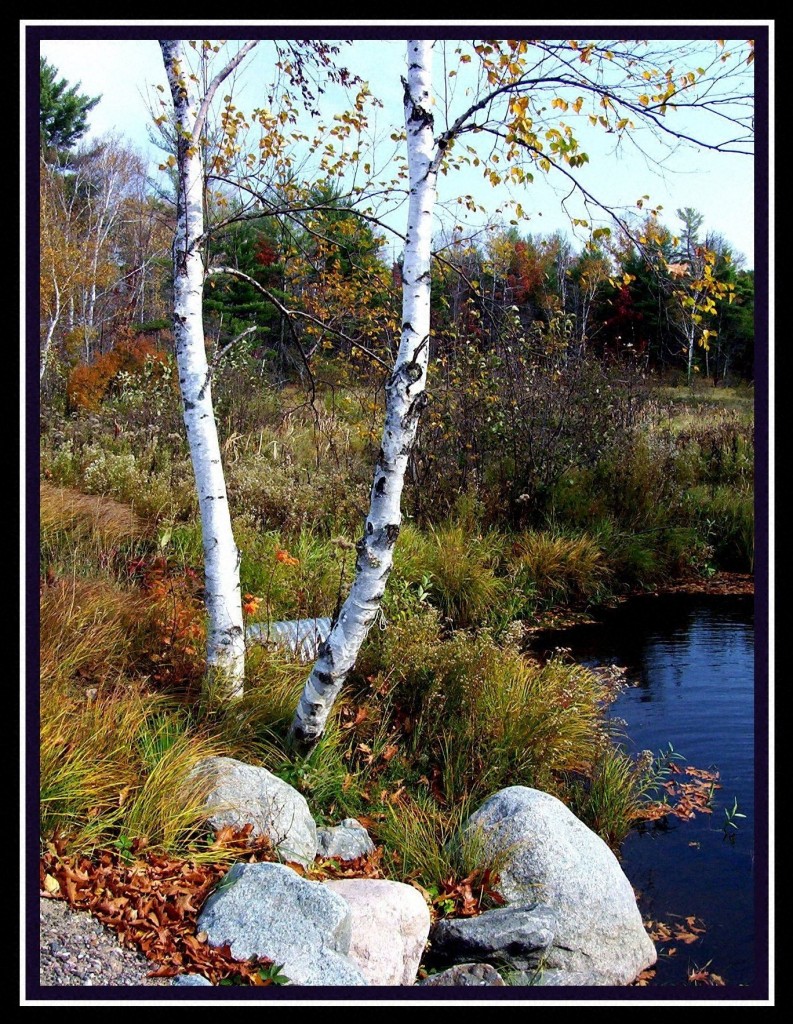 I changed it quite a bit since i didn’t really like the ugly pipe (trash?) in the grass, as well as the back trees cluttering the sight.

A few months back, I had painted this picture of Chinaman’s Bluff.
I have never loved it, so I painted over it with burnt sienna,and tried to make something better out of it. This is the result. 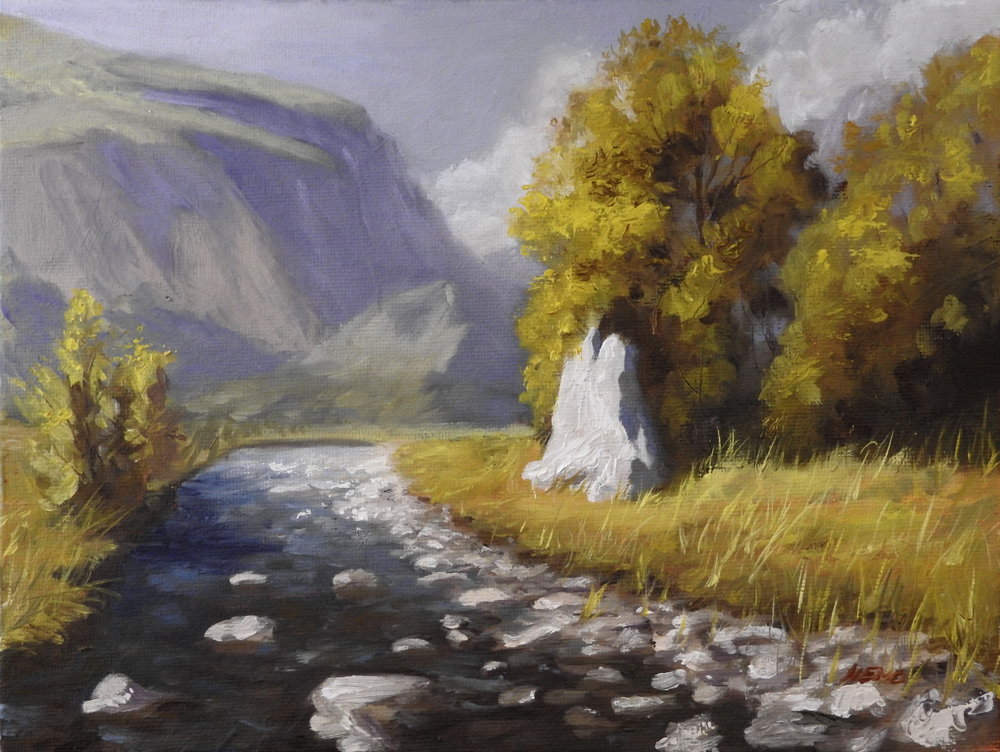 I am happy with it, this time. First of all, I re-thought the composition, since it was really poor. This time I did not slavishly follow the photo reference, but used others as well to help me make up the final image.
Then, I used a gamut mask of my hand painted color wheel to get the main colors. The shape is a triangle with one vertex on the brightest yellow, and the other two respectively on the second mostly gray blue ad purple (shown below) 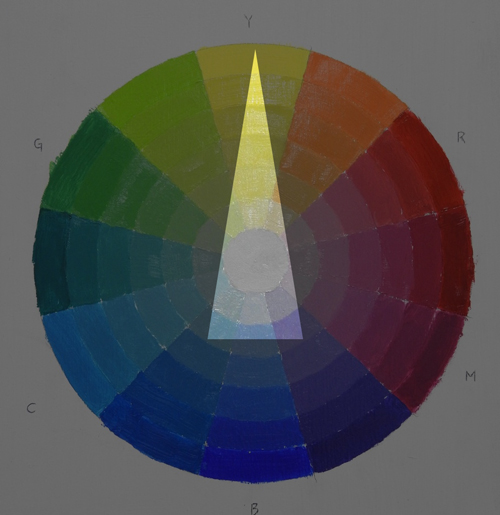 The photo is a bit more orange than the actual painting, which tends a bit more towards green compared to it.
Here are some passages of the painting: 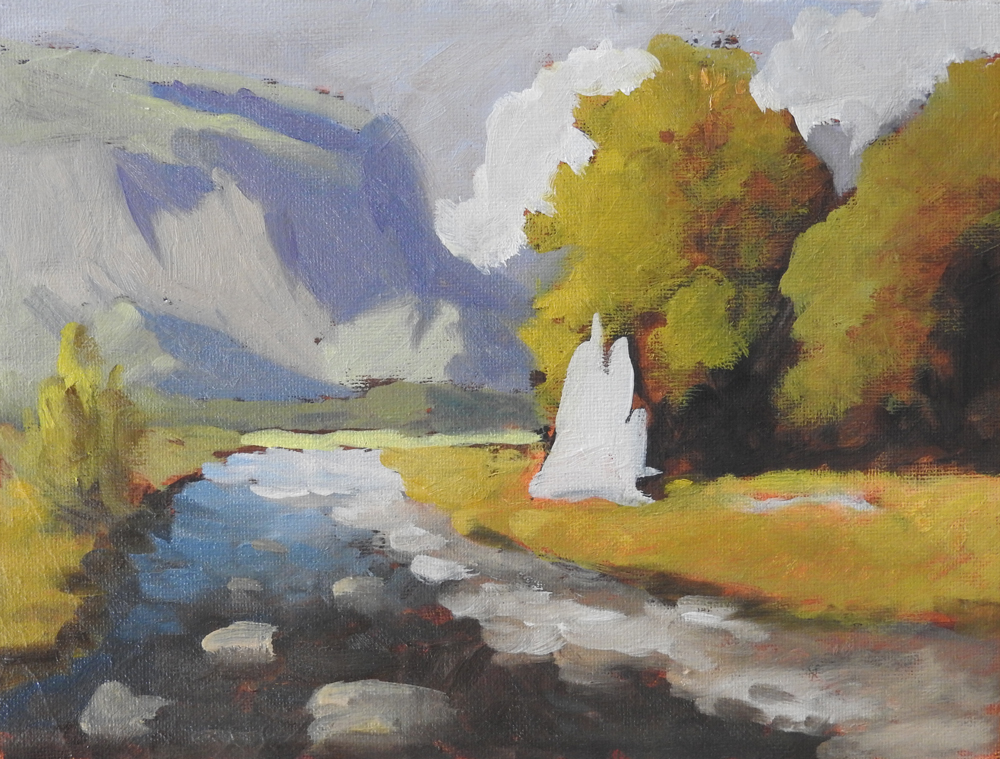 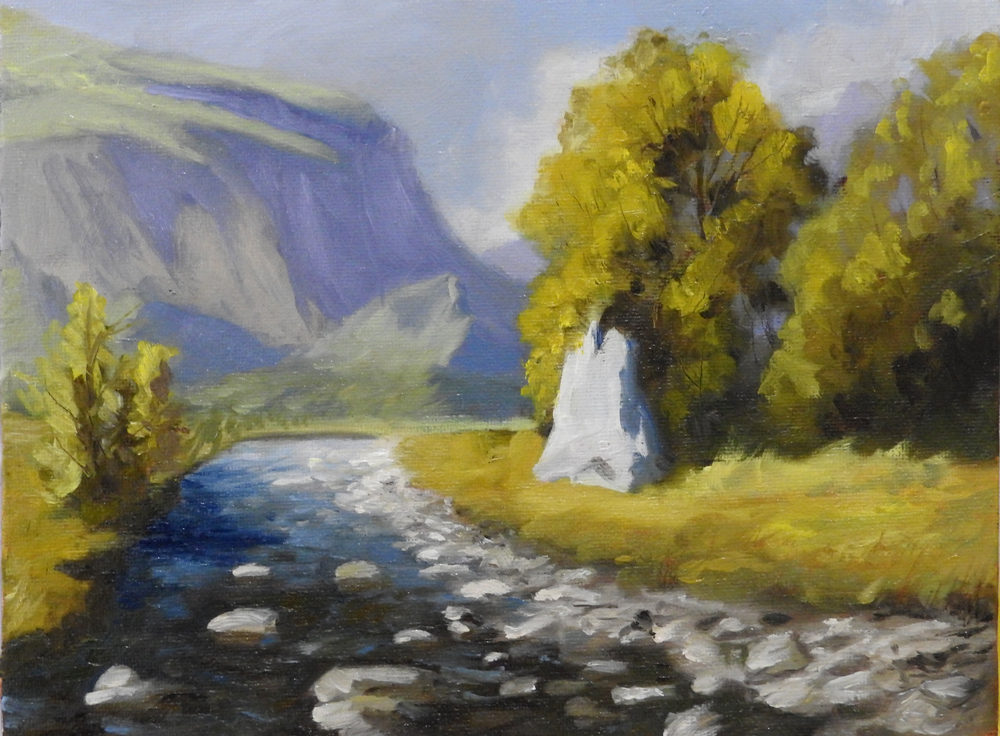 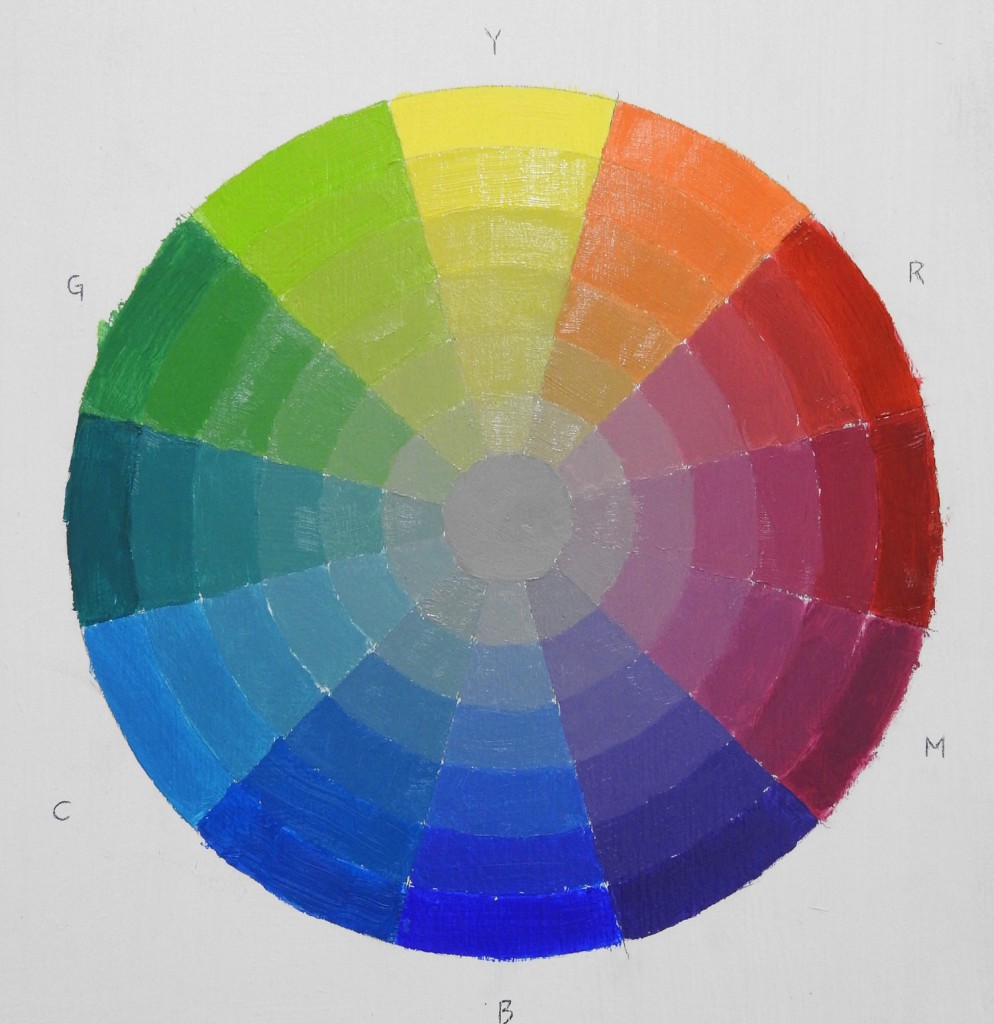 I’ve spent the last week painting my own color wheel, using a printed YURMBY one as reference. I failed in getting a greeny enough cyan and saturated enough purple. The cyan is also too light compared to the others (I took its lightness up with white).

Here was my setup 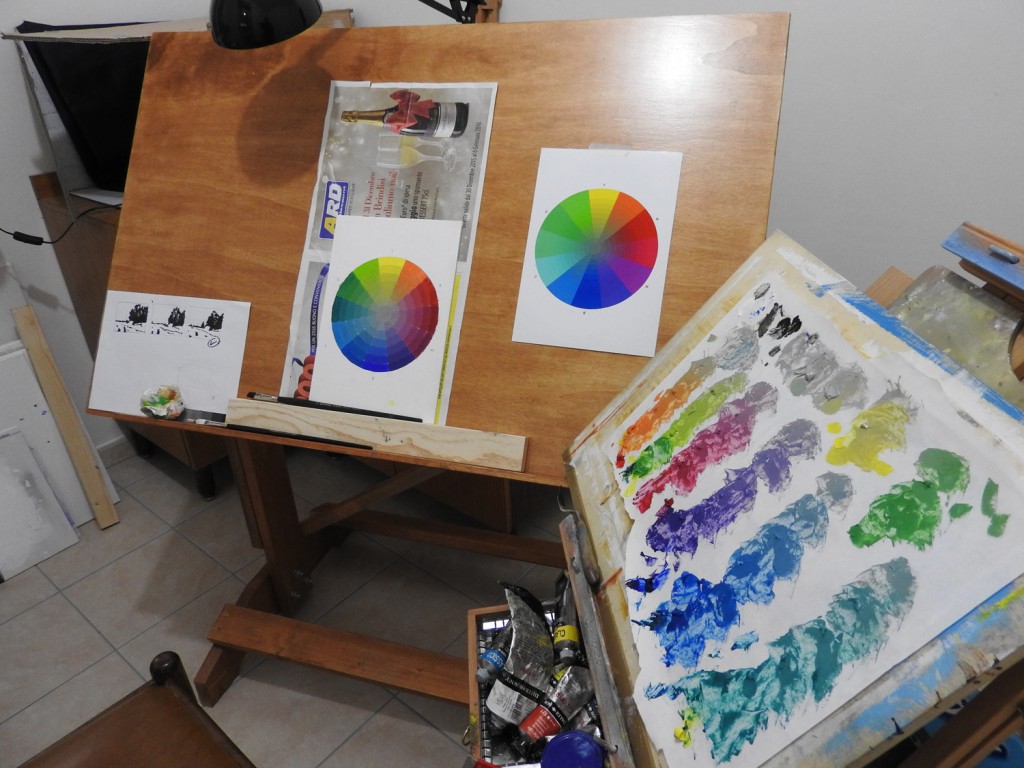 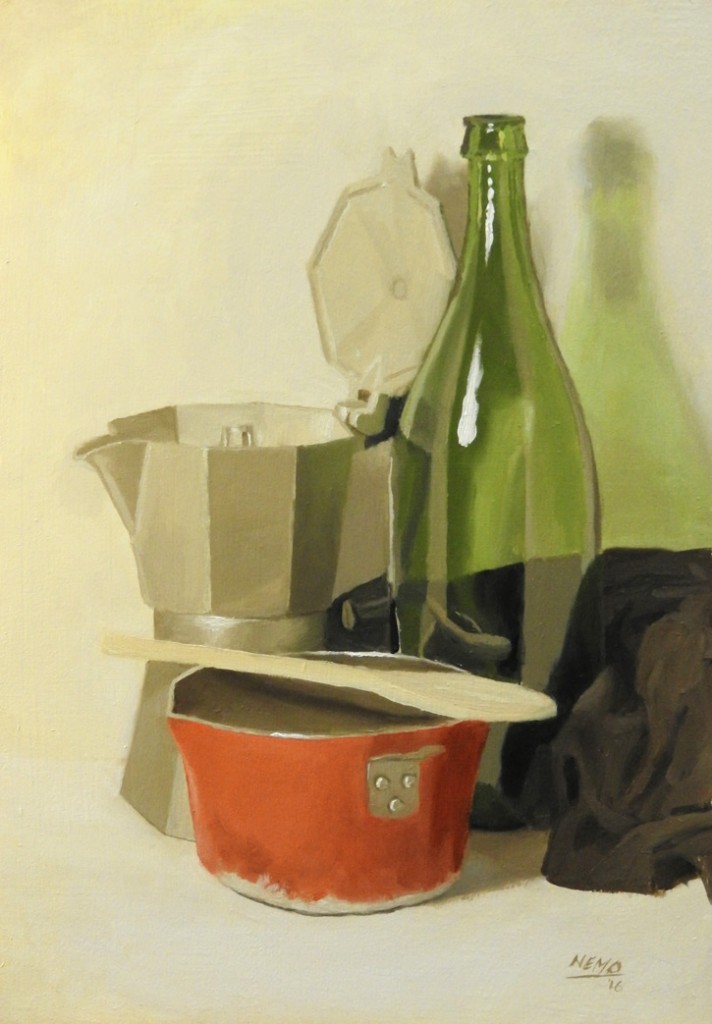 Here is, as promised last time, the colored exercise of my previous still life.
For this exercised I tried using a limited palette: Cadmium Yellow Light, Permanent Rose, Ultramarine, Burnt Sienna, Yellow Ochre.
I laid down the first layer as thinly as I could, still trying to follow Harold Speed’s advice. I thinned my paint with the 50/50 mixture of linseed oil and turps. (Photos have been taken under different lighting conditions, hence the huge difference in tone) 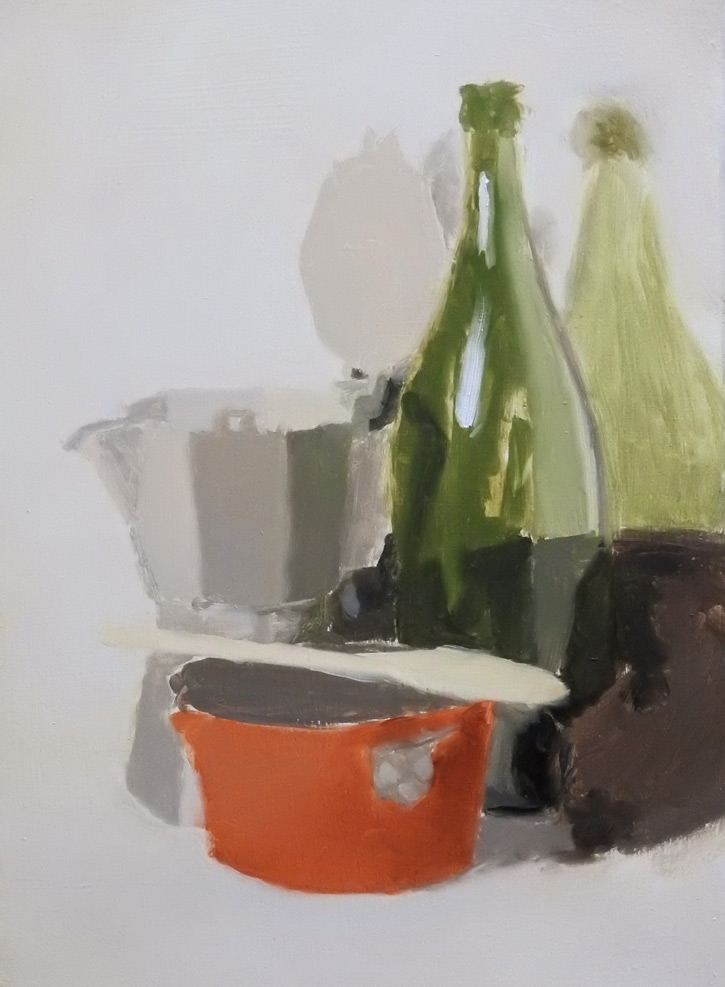 I let this try, then went for a second layer a week later. 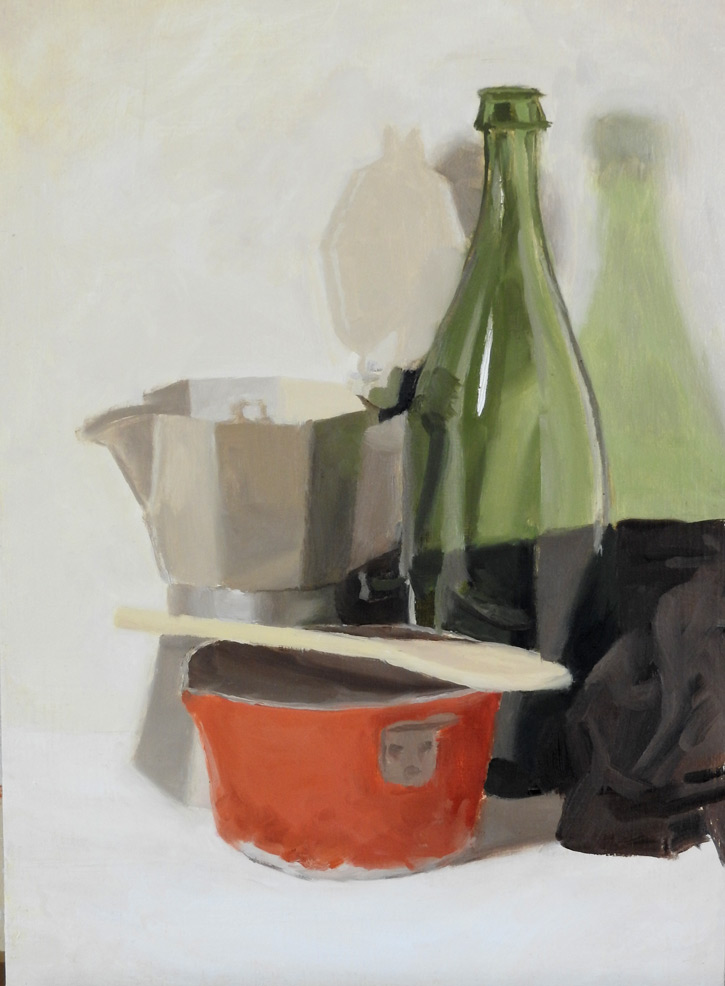 I had lots of trouble with the spoon’s shadow on the inside of the saucepan. Another week to dry (well, I just didn’t have time to finish it) and the result is the first image. In the last passage I made the greens on the bottle a lot more saturated as they were way too gray.
Finally, here is a photo oh my setup. I took it lower than my point of view for the painting, that’s why perspective is so different. Onto flowers now! 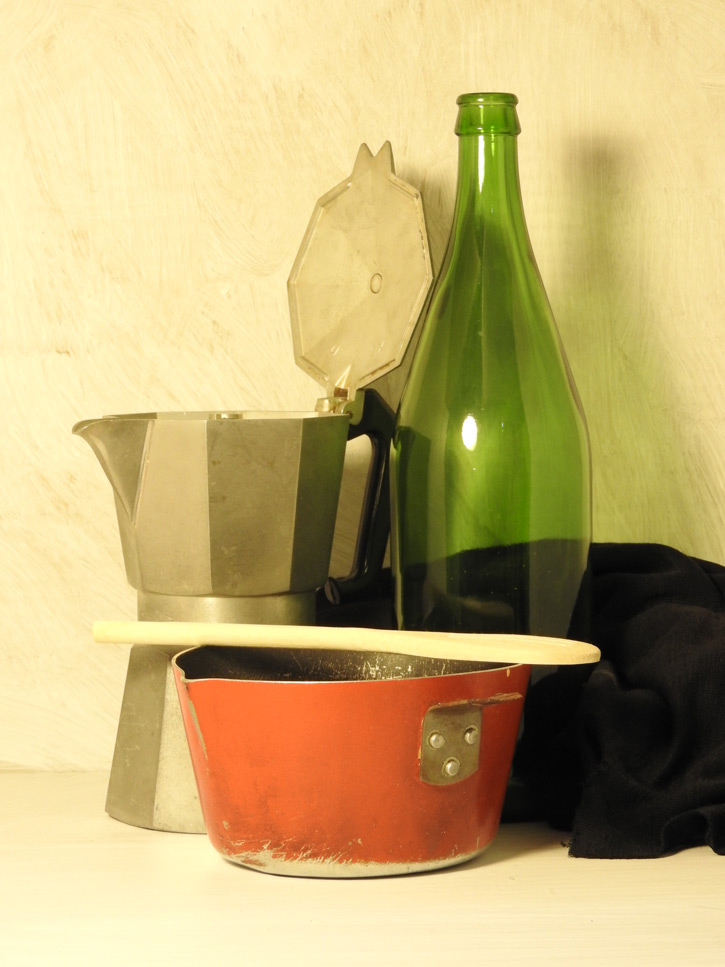 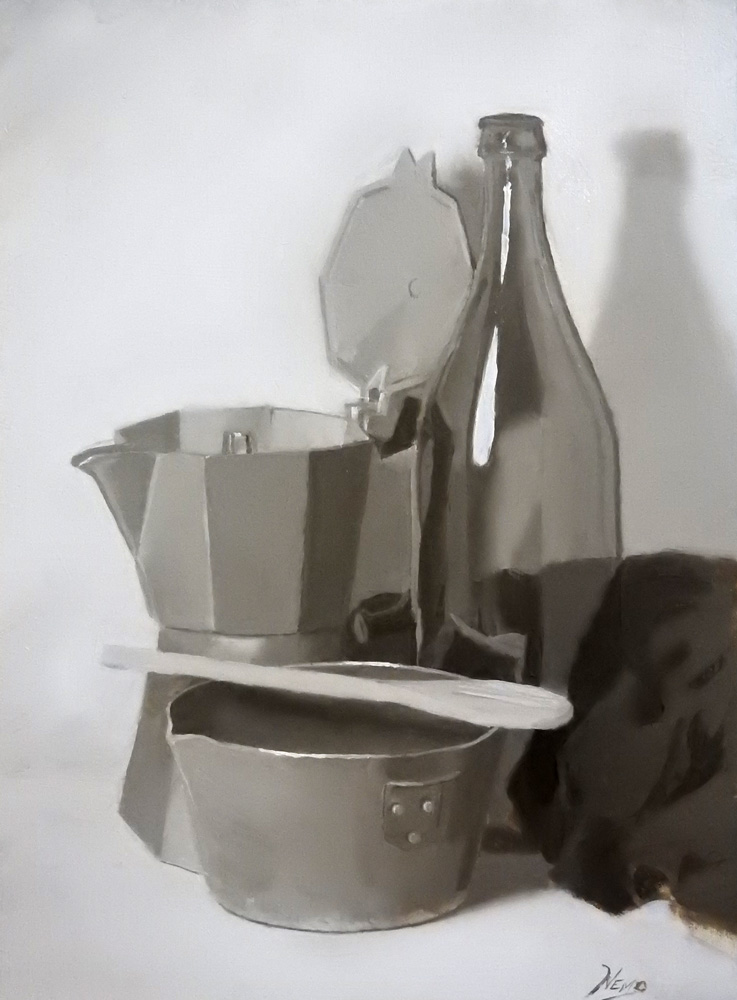 Continuing on the series of Tone Exercises proposed in Harold Speed’s Oil Painting book, I setup a simple still life in my studio. I will post the photo next time, with the color study, but for now I just wanted to mention the bottle is green and the front sauce pan of a bright red. I had trouble trying to match tones and the different qualities of the objects (like the wooden spoon), so, in the end, I think I didn’t take the coffee pot to a decent finish, probably because it was so worn and brushed that it barely had any reflection in terms of value (more in color).
Here 2 previous steps of completion. The goal was once more to try to use paint as thin as possible, while preserving its opacity. I probably didn’t do it enough, but I am happy with the result.

I used once more Burnt Umber + Titanium while, fairly thinned with a mixture of Turpentine and Linseed Oil (50/50). The board is a simple wooden panel with 4 coats of gesso. 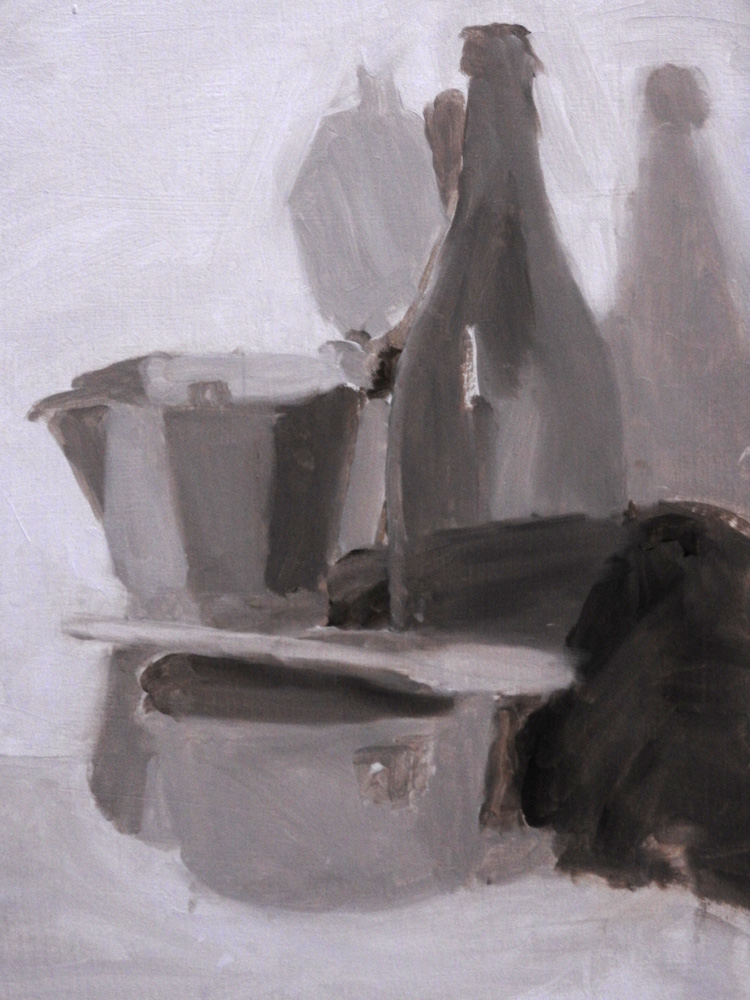 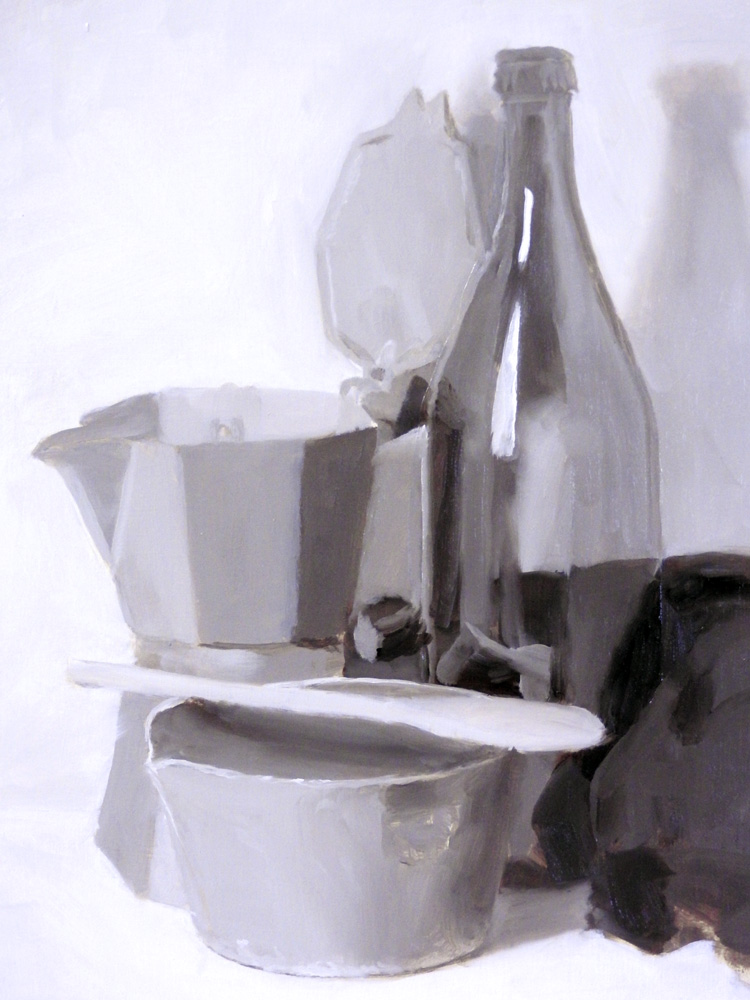 p.s. There was no actual color shift, I just took the photos under different lighting conditions

Following the method illustrated in the 1917 book The Practice and Science of Drawing, by Harold Speed, I tried the mass drawing (aka painting) of a head maquette. At the same time, I used another approach to paint a classic plaster cast I bought recently, illustrated in the Oil Painting Techiniques book, which we are discussing at Gurney Journey 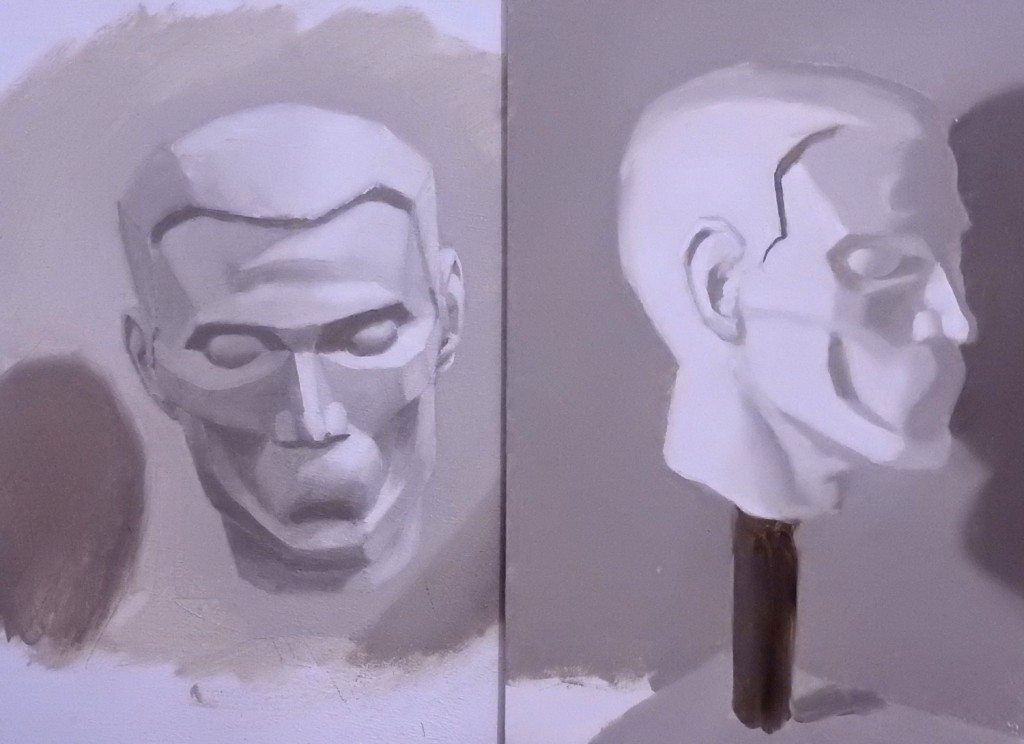 The first  method (on the left) is pretty simple: after laying down the base drawing in pencil and fixing it, you mix up a dark, mid, and light value with Raw Umber and white. I thinned the mid (ground) value down a lot with some Liquin, then scrubbed it across the whole surface. I then came in with the white, while the ground was still wet, and let the paint on my brush freely mix with it. This way, I had to use thicker paint to get the lighter values.

It’s a great exercise that helps you learning how to lay down paint, control its thickness, and think about strokes ahead. I then did the same with the dark, and came back in with the mid in a thicker version to fix thin spots.

Speed insists on the fact that you should keep lights and darks as separate as possible, so avoid letting them ever touch.

The second method (above right, and below), illustrated in the Oil Painting book, relies strictly on laying down very thin, yet opaque paint. Tones must be kept simple and arranged in large areas, while details must only be added after establishing the main masses. Overall, I prefer this latter method. 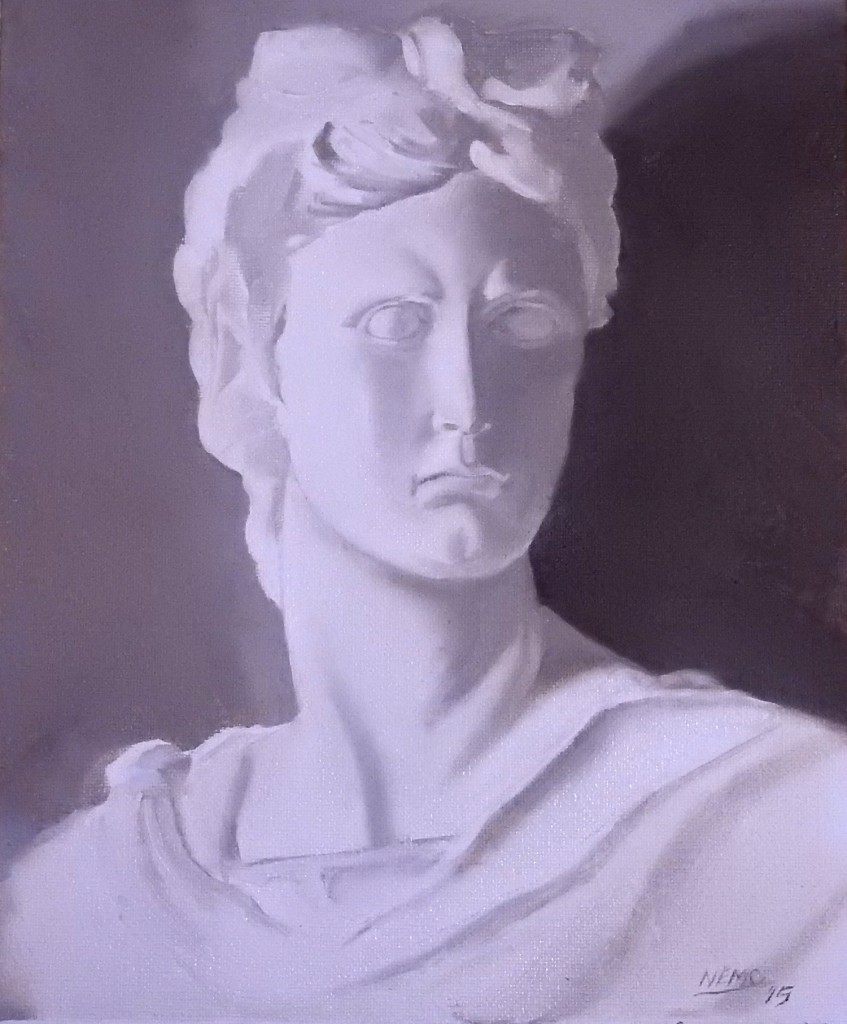 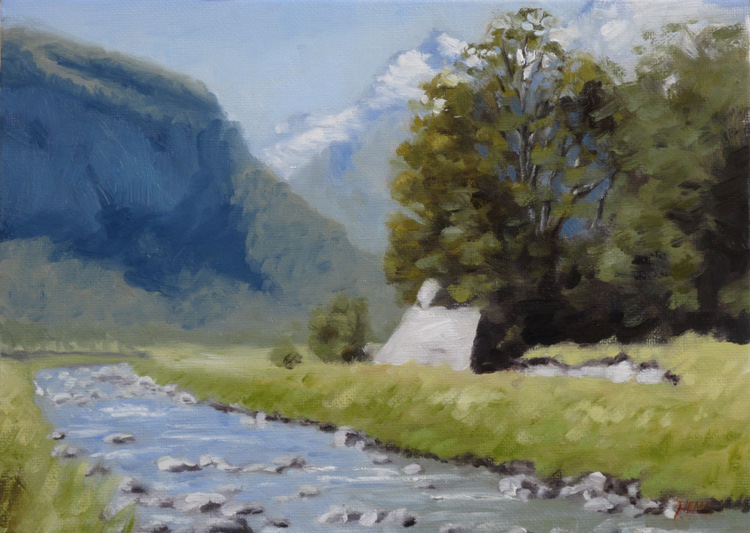 I finally got enough time to complete this painting. After having done all those preparatory studies, I really had to reward the photo with a complete piece.
I can’t say I am totally satisfied, but it’s a step forward. It’s still lacking variety in the brush shapes, as well as enough detail (I worked basically wet on wet). The middle distance cliff has been a pain much like in the studies, and I couldn’t get it the way I wanted. I also failed in capturing enough darkness and depth in the nearer water, as it looks a bit fake, but I guess it will be for next one.

My palette was: Titanium White, Nickel Azo Yellow (I still hadn’t got my cadmium yellow light), Venetian Red, Burnt Umber, Ultramarine, Primary Cyan, Yellow Ochre. I used a big #12 bristle Filtbert, a couple of smaller #4 ones, and a tiny synthetic #2 for the smaller strokes.