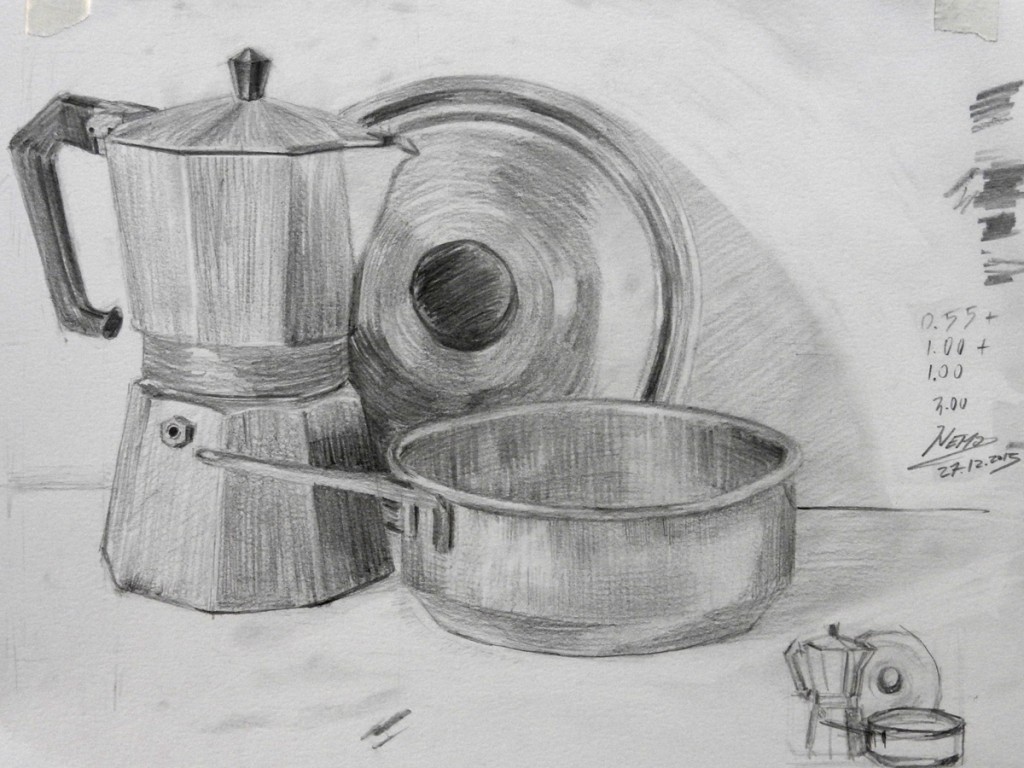 Once more following Artur Guptill’s “Sketching and Rendering in Pencil”, I somehow tried to applied the sketchy way of rendering shading he describes in Chapter IV, Part I.
I used a single pencil, 2b Mars Lumograph, although it’s recommended to use different grades for finished pieces. I guess this is fine since mine was more of an experiment. I setup a pretty simple still life with old, rusty metal objects: 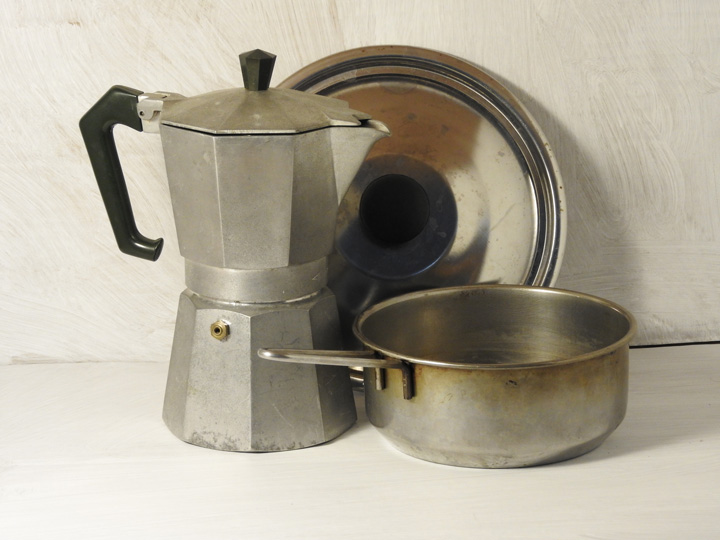 (notice the camera angle was slightly different from mine when I was drawing).
As you can see from my notes on the side, it took me roughly 3 hours. More to get the drawing accurate, to be honest, since the shading was pretty quick and probably not careful enough. 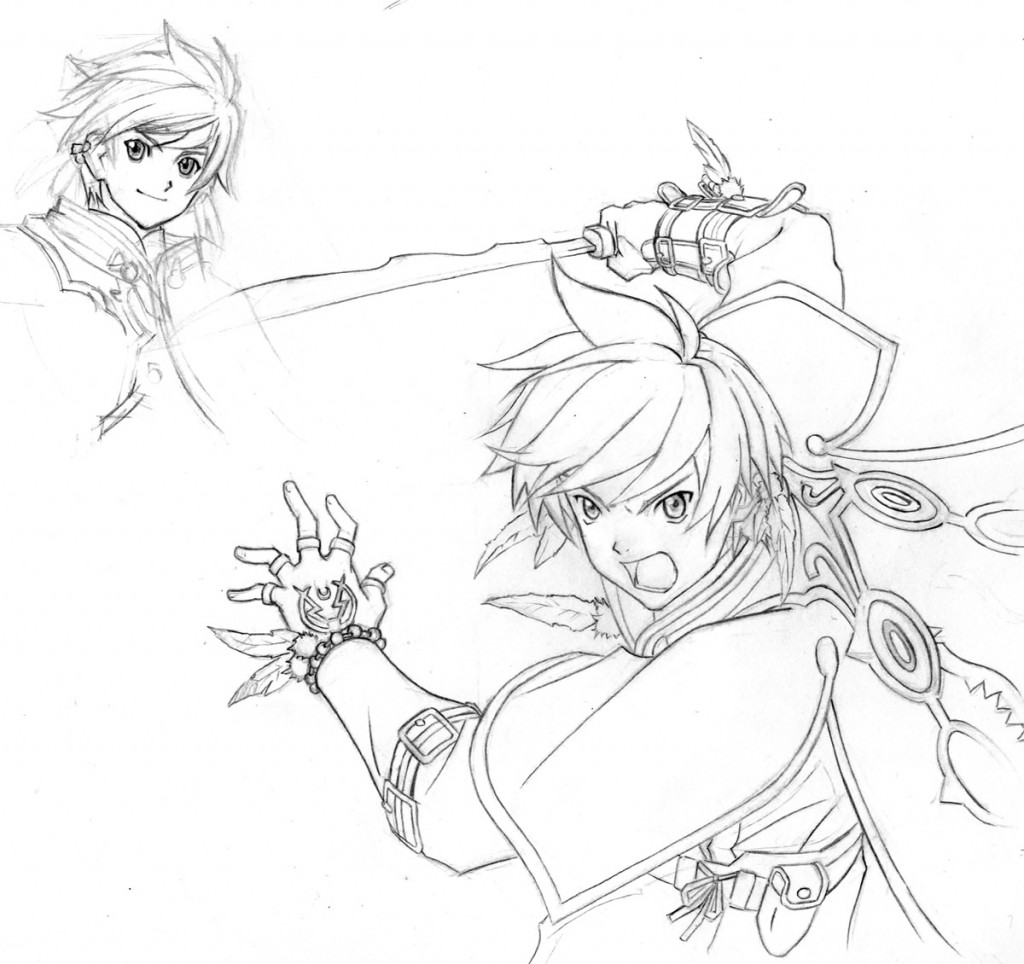 I’ve been playing this amazing game named Tales of Zestiria recently. Since the style resemble japanese anime, and the protagonist is so cool (!) I thought I could spend a few hours drawing him. The english name is wrongly translitterated to Sorey, although it should really be Slay.

2b and mechanical 2b (for the refined parts) on Winsor & Newton Cartridge pad, A4

I’ve been using Artur Guptill’s Sketching and Rendering in Pencil recently. Quite an informative book, especially if you don’t have an academical art background, like me.
The first part deals with the importance of painstaking accuracy in line drawing. I feel I sometimes lack the speed I need to quickly measure and report big shapes of what I draw. Therefore, following his example, I took an old shoe of mine (though it’s not so worn out) and drew it. The full drawing took a lot, like 4 hours, to be completed.
I first blocked in the big masses, constantly taking my drawing near the subject to compare it. It’s useful to strive for precision just by eyeballing, as I noticed measuring too much with the thumb on the pencil is not only time consuming, but not  precise enough to base the drawing on it. 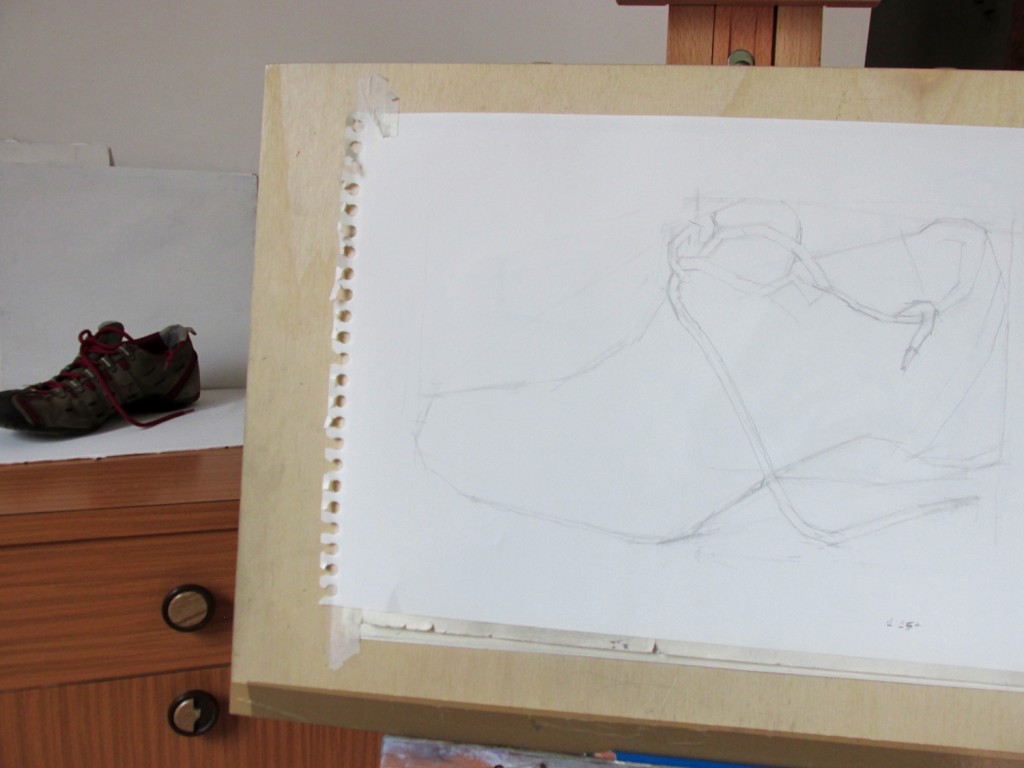 Then I worked (really) slowly to getting more and more details in, till getting to this final result: 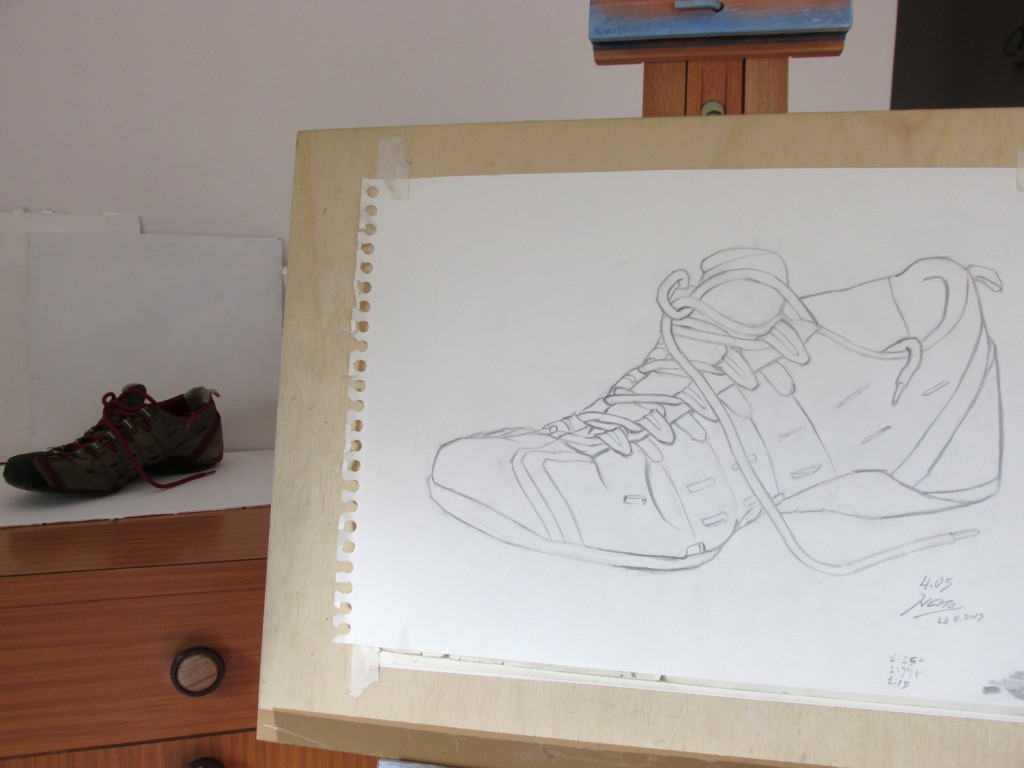 The point of the final drawing would be to exploit the true “character” and “mood” of the object.

p.s. Yes, those  strings have been a pain to copy.

.
This week, we discuss chapter 3 on the technique of painting (I didn’t have time to re-post part 2 of chapter 2).

Here are The main points highlighted by Gurney, almost verbatim quotes from the book.
1. “Few people realize how little they really see of the marvelous things happening on the retina of the eyes.”

2. “Sight as a faculty is not so essential to our survival as some of our other senses, such as touch.”

3. “…the surprise that greeted the first pictures of the impressionist movement.”

4. Parallel between developments in art history and the individual’s development of the faculty of sight.

5. “The extreme impressionists said there was no outline, and no use for line drawing.”

Here is my recap of this Chapter:

Our perception of the world is associated to the sense of touch, rather than on sight. We do not remember objects much as we see them,  but rather how we know they are, as a solid mass that we got accustomed with during childhood. The same goes for both shape and color. Rather than remembering the impression the object had in our retina, under “those” lighting conditions, we remember a generic shape, as it would appeal our touch sense when getting close to it (a table with four legs of the same length), having the color the surface would have under normal light.

This was clear in Egyptian drawings, representing the known, not the seen fact. An exception is represented by some cave drawings, which are purely impressionists and get away from the metal idea of form. They can be linked directly with Chinese or Japanese traditional paintings.

Light and shade was the great discovery of the 15th century (Masaccio, Leonardo). Up until then, paintings had started simply as lines little by little filled with a bit more of local color, but without getting to real shading, and with the only late introduction of the laws of perspective. This, plus Aerial Perspective, constituted the whole knowledge on visual representation that guided artists till the 18th century

Impressionists revolutionized the world of painting, by throwing away the whole concept of line as boundary of the form, and focusing exclusively on the flat image impressed on the retina. They threw away too much though, as they lost the power line possessed of appealing the sense of touch.

Line drawing, as well as the impression of light on the retina, and thus masses of color, must be put together, and painting should embrace both as a whole.

Bottom Line: I mostly agree with Speed once more. I like how he uses the sense of touch to describe the mental idea we have of an object, and also agree on having to keep a certain line quality in painting.

Next week—Chapter 4: The Painter’s Training